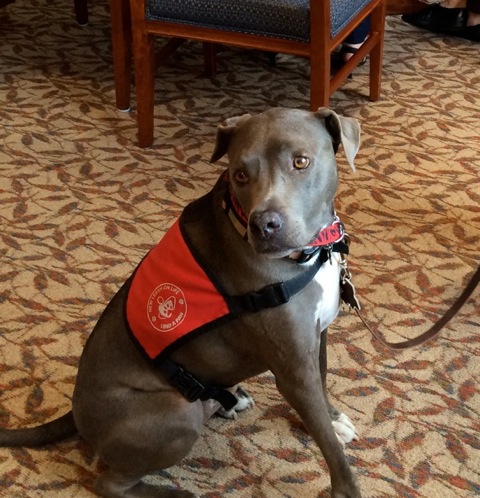 When the Lend A Paw team began to visit the Los Angeles Mission with a group of therapy dogs, they had their work cut out from them. From talking to the children, Barbara Sulier, a LAP volunteer, has learned that most of them are fairly recently homeless and on the streets. They talk about what they have left behind and often of the pets they had to give up. But there are also children who have spent all their life on the street or are were too young to remember anything different. These are the children who are often afraid of the dogs because the dogs they’ve encountered are not kind, affectionate, well-groomed, safe pets. Noah was one of those kids and Barbara tells us,

"One day when there were enough dogs to go around, I was asked to work specifically with Noah, a boy about 7-8 years old. He was afraid of dogs and was at the far end of the craft room sitting in a chair. I pulled up a chair next to him, keeping Cody on the outside of me. I started by talking to Noah about Noah. While we talked, I pet Cody’s head. Cody put his head on my lap and I continued talking and petting. Then Noah and I started talking about Cody. Cody, pushed his head further across my lap almost over to the end of Noah’s chair. As Noah became more comfortable, I gradually moved Cody between my chair and Noah’s, trying to call NO attention to it. We continued talking, I continued petting. Pretty soon, Noah was petting too. Cody put his head on Noah’s lap and I think the friendship was formed at that moment. Within about 20 minutes, Noah would “walk” Cody, groom Cody, hug Cody and get kisses from Cody. Noah LOVED lying on Cody lying on the floor. As I was leaving and saying all my goodbyes, Noah came over and asked ' I know Cody has a name, but does he have a middle name?' I said no. Noah replied – 'He does now – it’s Noah.' "